The Roots of Ultimate 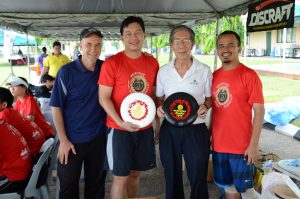 In 2002, the only ones playing Ultimate were a few expat teachers at ISKL in Ampang on Sunday afternoons…along with a local or two. In July that year, a group of American students (related to Past the Edge and Global Sports Partners) brought a few discs on a cultural exchange project at UITM in Terengganu. The students had so much fun that one of them, Bob, asked Douglas Ladner of GSP “Uncle, when you go back to KL can you send us a few discs? We have a group of orphans coming at the end of the month and we want to teach them to play.” The only discs that could be sourced locally were the cheap supermarket variety but that was the impetus of Douglas together with a great friend Abul eventually manufacturing Malaysia’s first and only disc, MyDisc under Global Sports Partners.

The Growth of Ultimate

There were several critical elements in the early development of Ultimate in Malaysia. There are many, many gaps but here are a few key contributors (feel free to contact us with corrections or glaring omissions!):

Certainly the Spirit of the Game (SOTG) – the heart of the sport – should be ultimately  credited with the incredible growth of the sport. SOTG reminds all players “That while competitive play is encouraged, it is never at the expense of respect between players, adherence to the rules or the joy of play.”  Surely the sport of Ultimate is far more than a sport, but is also making a valuable contribution to a stronger sense of commUNITY among all peoples of the nation. The best is yet to come!

In the summer of 1968, Joel Silver was introduced to a “frisbee football” type game while participating in an educational enrichment program at the Mount Hermon School in Northfield, Mass. After returning to Columbia High School in Maplewood, N.J., that fall, he got a motion passed at the student council to introduce Frisbee into the curriculum. Together with his friends Bernard “Buzzy” Hellring and Jonathan “Jonny” Hines, they got other students to play their new game and refined the rules, producing a written “first edition” of the rules for the sport Joel dubbed “Ultimate Frisbee” and naming their group the “Columbia High School Varsity Frisbee Squad” in early 1970.

The three classmates laid the foundation required to permit the transformation of a recreational activity into a sport over the following years. Ultimate today is still played largely according to the rules developed by Joel, Buzzy, and Jonny. Joel Silver is currently an accomplished Hollywood producer, producing dozens of films including the Lethal Weapon series, the first two Die Hard films, and The Matrix series. He is married to Karyn A. Fields, has one son, and currently lives in Burbank, Calif.

Jonny Hines, who founded the Princeton team and played in the first college game ever — the Rutgers-Princeton match-up played before more than 1,000 spectators in 1972, is now an international attorney splitting time between New York and Moscow. He is married to Olga Dyuzheva and has two sons. Tragically, Buzzy Hellring died in an automobile accident while returning to college at Princeton University in the spring of 1971.